On this post we want to summarize the big picture of changes to service providing jobs from 1990 through 2012. The table below highlights sector job counts detailed from the sector job posts above. Remember it does not count people employed, which averaged 142.5 million for 2012. People employed counts wage and salary employment and the self employed both in and out of agriculture. The table below counts jobs, otherwise known as establishment employment without any self employed, which had a monthly average total of 133.7 million jobs in 2012. Jobs do not equal people employed because one person can have two or more jobs. One person with two jobs is counted twice in the jobs data, but once in the people employed data.

Summary of Service Industry Employment with pie charts below 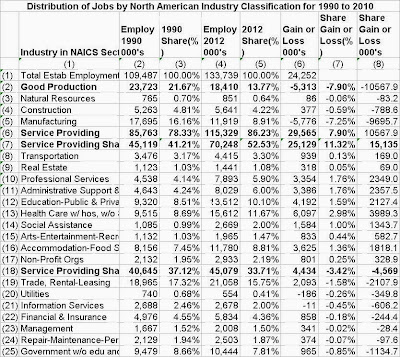 Columns (2) and (4) in the table have annual average establishment employment by North American Industry Classification for 1990 and 2012. Columns (3) and (5) have their respective percentage shares of establishment employment with column (6) showing the gain or loss of jobs from 1990 to 2012. Column (7) has the difference of the percentage of sector employment for 2012 from the percentage for 1990. As a computation it is column(5) minus column(3). For example, row(2) shows changes and percentage shifts in goods production. Goods production employment declined 7.9 percent.

Column(8) translates the share changes into jobs from a share loss. For example row(2) shows 5.313 million jobs lost for goods production employment. If good production had maintained its share of employment as it was in 1990 there would be 10.568 million more goods production jobs than there are in 2012. The number is the product of total establishment employment in row(1) and column(4) and the percentage gain or loss in column(7). Notice that the loss of goods producing employment exactly equals the gain of service providing employment. The other rows in column(8) are computed the same way and distribute the share gains and losses between different industries.

The table also highlights the shift of employment within service providing industries, where there are 15.420 million new jobs that resulted from an industry's percentage increase of all jobs. This constrasts with 4.853 million jobs lost that resulted from an industry's share decreases. The combination exactly equals the 10.568 million gain for service providing industries and the equivalent loss for goods production. 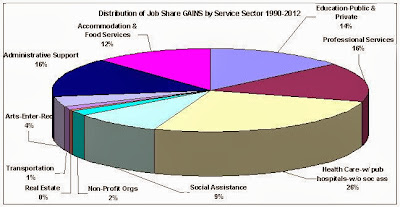 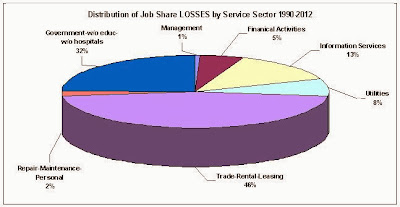 Posted by Fred Siegmund at 1:42 PM

Undeniably believe that which you said. Your favourite justification appeared to
be at the internet the easiest thing to understand of.
I say to you, I certainly get irked even as folks consider concerns that they plainly
do not know about. You controlled to hit the nail upon the
top as neatly as defined out the entire thing
with no need side effect , people can take a signal.
Will probably be back to get more. Thanks

Look at my blog: Milissa Huelse

Your style is unique compared to other folks I've read stuff from. Thanks for posting when you have the opportunity, Guess I'll just bookmark this web site.

I needed to thank you for this very good read!! I definitely
loved every bit of it. I have got you book marked to look at new
things you post…

Hello! Someone in my Myspace group shared this website with us so
I came to check it out. I'm definitely enjoying the information. I'm
book-marking and will be tweeting this to my followers!

hanks for the information
do not forget to visit my website
http://www.listberbagi.info/