When the BLS situation report comes out each month job totals go up. An increase in jobs is an easy forecast because the population is growing. In 1990 the Bureau of the Census reported 189 million in the civilian population older than 16. After 17 years of continuous increase the civilian population reached 231 million in 2007. Population and jobs go together because people have to have jobs. Large scale unemployment in an urban society guarantees untenable social, economic and political conditions. Politicians will do whatever is necessary to keep spending high enough to generate new jobs, but it is not enough to ask if jobs are increasing. It is more important to ask if they are increasing enough to sustain a society that relies on jobs for self support?

One way to look at job growth is to make a chart of job differences over a long period like 10 years. Suppose we take monthly data for employment for December 2007 and subtract it from monthly data from December 1997, exactly 10 years before. The difference gives the increase or decrease for the decade from December 2007 to December 1997. Suppose further we back up a month and take the difference of November 2007 and November 1997 and so on. That way there is a number that equals the increase, or possible decrease, over ten years that can be paired with its date and plotted on a chart. Fellow bloggers are invited to review the series of charts below and make up their own mind about jobs.

Pictures Worth a Thousand Words

Chart 1 below has a plot of monthly 10 year change for the civilian labor force plotted from January 2000. Notice among the ups and downs that Chart 1 starts out on the left side with a number just under 17 million. Therefore, the labor force in January 2000 is about 17 million more than January 1990. Notice on the right side of the chart that 2007 ends with a number just under 17 million making the current labor force about 17 million more than January 1997. Even though the Chart gyrates there is no overall trend of differences. It remains roughly flat with an average 10 year monthly gain around 17 million a month over month. 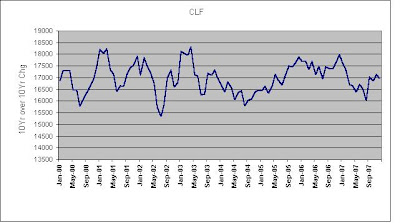 Chart 2 plots 10 year changes for non-farm establishment employment. Around May 2001 there were 24 million more establishment jobs than May 1991. After that the ten year change of new jobs starts to decline and keeps declining month after month after month until around March 2005. It levels off some and then declines further up to the end of 2007. The decline contrasts with continued growth of population and steady change in the labor force. The last month on the Chart is Decmber 2007 with an increase of 14.1 million. 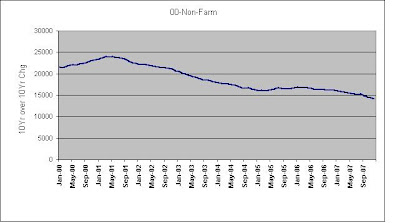 The remaining charts, Charts 3 through 11, show 10 Year job changes in the same way but for broad industry categories. Chart 3, goods production jobs in natural resources, construction and manufacturing helps show America's transition to a service economy. The remaining charts are all service charts and we have to hope there are enough good jobs in services to make a smooth transition to that well publicized service economy.

Scroll down to Chart 4 with Wholesale and Retail Trade, Transportation and Utilities, and Chart 5 Information Services. Keep scrolling to find the profile for financial activities, business and professional services, public and private education, health care, leisure and hospitality, which is mostly restaurants, and government employment excluding education. Remember the government the great engine of employment. 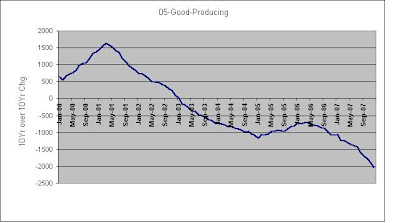 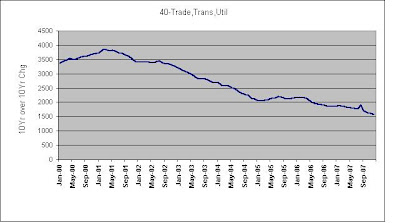 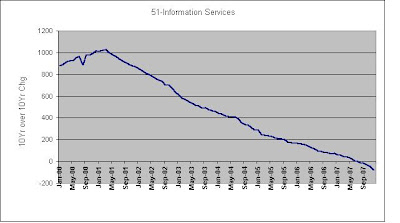 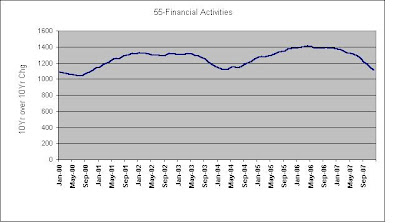 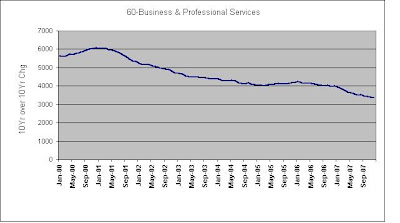 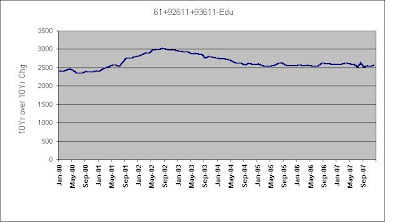 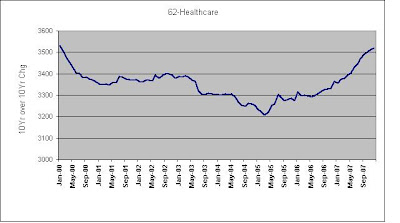 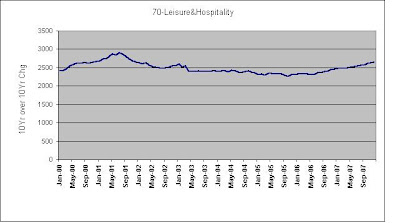 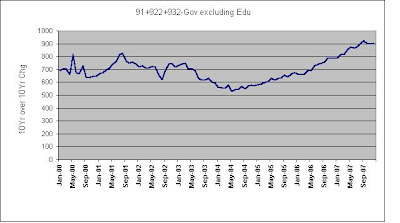 Posted by Fred Siegmund at 4:48 PM